The United Nations Sustainable Development Goal 17, an integral part of the 2030 Agenda, has a target to increase the timely availability of data regarding age, gender, race, ethnicity, and other relevant characteristics which documents like a birth certificate has the capacity to provide.[1] 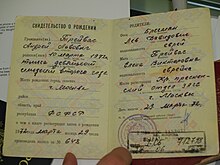 A Soviet birth certificate from 1972.

The documentation of births is a practice widely held throughout human civilization. The original purpose of vital statistics was for tax purposes and for the determination of available military manpower. In England, births were initially registered with churches, who maintained registers of births. This practice continued into the 19th century.[2] The compulsory registration of births with the United Kingdom government is a practice that originated at least as far back as 1853.[3] The entire United States did not get a standardized system until 1902.[4]

Most countries have statutes and laws that regulate the registration of births. In all countries, it is the responsibility of the mother’s physician, midwife, hospital administrator, or the parent(s) of the child to see that the birth is properly registered with the appropriate government agency.

The actual record of birth is stored with a government agency. That agency will issue certified copies or representations of the original birth record upon request, which can be used to apply for government benefits, such as passports. The certification is signed and/or sealed by the registrar or other custodian of birth records, who is commissioned by the government.

The right of every child to a name and nationality, and the responsibility of national governments to achieve this are contained in Articles 7 and 8 in the United Nations Convention on the Rights of the Child: “The child shall be registered immediately after birth and shall have the right from birth to a name, the right to acquire a nationality…” (CRC Article 7) and “States Parties undertake to respect the right of the child to preserve his or her identity, including nationality, name and family relations…” (CRC Article 8).[5]

…it’s a small paper but it actually establishes who you are and gives access to the rights and the privileges, and the obligations, of citizenship.

Despite 191 countries ratifying the convention, the births of millions of children worldwide go unregistered. By their very nature, data concerning unregistered children are approximate. About 29% of countries don’t have available or sufficient data to assess global progress towards the SDG goal of universal coverage.[7] However, from the data that is available, UNICEF estimates that more than a quarter of children under 5 worldwide are unregistered.[8] The lowest levels of birth registration are found in sub-Saharan Africa (43 percent). This phenomenon disproportionately impacts poor households and indigenous populations. Even in many developed countries, it contributes to difficulties in fully accessing civic rights.[9]

Birth registration opens the door to rights to children and adults which many other human beings take for granted: to prove their age; to prove their nationality; to receive healthcare; to go to school; to take exams; to be adopted; to protection from under-age military service or conscription; to marry; to open a bank account; to hold a driving licence; to obtain a passport; to inherit money or property; and to vote or stand for elected office.[10]

There are many reasons why births go unregistered, including social and cultural beliefs and attitudes; alternative documents and naming ceremonies; remote areas, poor infrastructure; economic barriers; lack of office staff, equipment and training; legal and political restrictions; fear of discrimination and persecution; war, conflict and unrest or simply the fact that there is no system in place.[10][11][12][13][14][15]

Retrospective registration may be necessary where there is a backlog of children whose births have gone unregistered. In Senegal, the government is facilitating retrospective registration through free local court hearings and the number of unregistered children has fallen considerably as a result. In Sierra Leone, the government gave the National Office of Births and Deaths special permission to issue birth certificates to children over seven. In Bolivia, there was a successful three-year amnesty for the free registration of young people aged between 12 and 18.[16]

Statelessness, or the lack of effective nationality, impacts the daily lives of some 11–12 million people around the world. Perhaps those who suffer most are stateless infants, children, and youth. Although born and raised in their parents’ country of habitual residence, they lack formal recognition of their existence.[17]